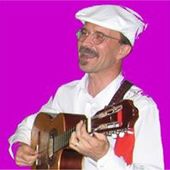 Give Credit Give Tero Credit

I am a musician specialized in Cuban music, Master of Arts in Education and special education teacher. I began my musical studies in the Espoo Music Institute (1973-1982) double bass was my main instrument. I studied in the Turku Conservatory (1982-1986) in. I lived in Santiago de Cuba nine years from 1992 to 2001 and worked there as a professional musician playing tres in Casa de la Trova. Currently I am working in the Kilonpuisto School as a special education teacher teaching autistic pupils. I have played in numerous domestic and foreign bands. In Cuba I played in following bands: Conjunto Guitarras y Trovadores (1992-2001), Cuarteto Daiquirí, Changüí Santiago and Los Cumbancheros. Some of the Cuban music bands in Finland I have played in: Septeto Son (1982-1992), Orquesta ache, Los Gigantes, etc. At the moment I play in Septeto Son and Quinteto Cubaché.